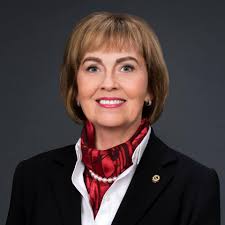 PRESS RELEASE
The International President of Lions Clubs International, Gudrun Yngvadottir is visiting Ireland next week.
She will be received by An Taoiseach, Leo Varadkar at Government Buildings at 5pm on Monday 29th. April and by the Lord Mayor of Dublin, Cllr. Michael Ring at the Mansion House at 3.30pm.
President Yngvadottir will travel to Thurles on Tuesday 30th April to visit Lions Club housing and ‘listening’ projects and will travel to Newry on Wednesday 1st May to participate in a Lions ‘Newspaper for the Blind’ recording.
A biomedical scientist, she heads the world’s leading voluntary service organisation, which has 1.4m members in 47,000 Lions Clubs spread through more than 200 countries and regions.
President Gudrun is the first native of Iceland to head Lions Clubs International and is also the first woman to hold this office.
She has held many local, national and international offices within the Lions global family and says that her work ethic and unwavering determination stem from her Icelandic upbringing—'a small but mighty country where the citizens boast a long history of overcoming obstacles and achieving success’
As International President, Gudrun is actively promoting Lions programmes in the areas of diabetes, hunger, childhood cancer and the environment and she spearheads the ‘New Voices’ initiative which recognises and promotes the role of women within Lions Clubs International.
Since 1990 she has worked at the University of Iceland as vice director of the Institute of Continuing Education and she remains active in the Icelandic Association of Biomedical Scientists.
President Gudrun is married to Dr. Jon Thorsteinsson, who accompanies her on her visit to Ireland and they have a son, daughter and six grandchildren.

President Gudrun is available for interview throughout her visit. To make an appointment please contact Frank O’Donoghue District Governor, Lions Clubs International on 087 2312637 or Frank Corr, District PRO on 086 8274710.